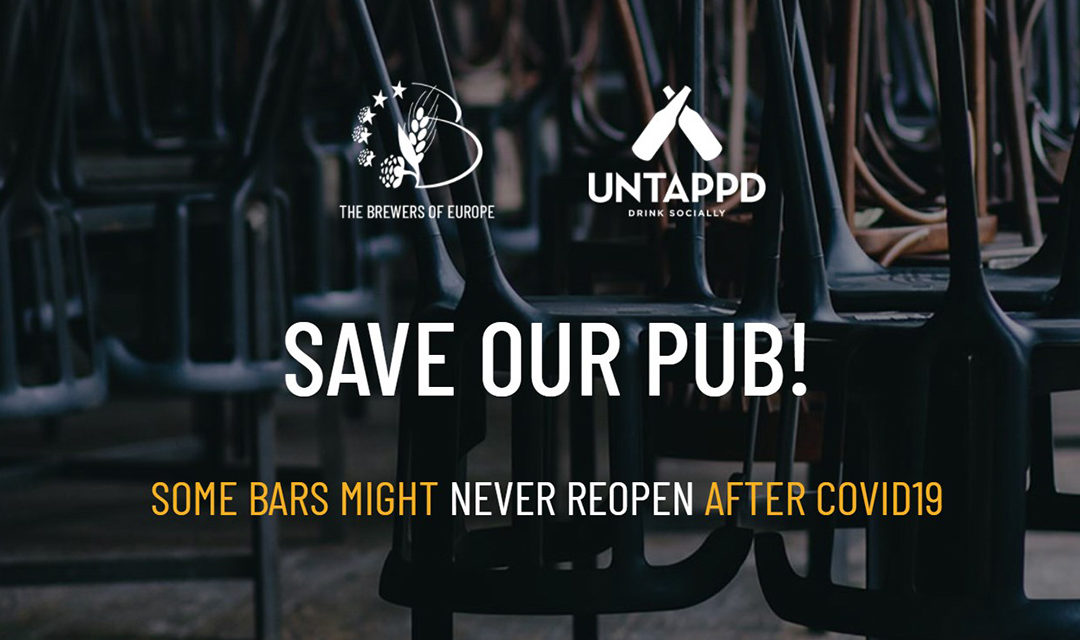 The Brewers of Europe has begun a partnership with popular beer rating app Untappd to boost support for the hospitality sector during the pandemic.

Users of the app – downloaded by 8.5m people globally – have been ‘checking in’ at home instead of at their favourite bars and restaurants whilst venues remain shut due to the pandemic. From today they will be able to show solidarity with local pubs through unique promotional messages via the app.

This involves pop-up banners and social media click through actions with a message to #SAVEOURPUB and #RECONNECT.

The aim is to raise awareness of the struggle faced by the brewing community and the whole value chain that relies on it, and for governments to recognise the economic contribution of the sector.

Pierre-Olivier Bergeron, Secretary General of The Brewers of Europe said “Beer consumers are fiercely proud and extremely knowledgeable about their beer. We all want our favourite bar and pubs to still be able to reopen when the pandemic is over. This collaboration with Untappd will tap into that passion for beer and gives a unique channel to share hope that the sector can be a driver for the recovery”.

“Checking in a beer at home on the Untappd app helps keep the community connected with the local pubs and breweries they love,” said Trace Smith, CEO of Untappd. “We are proud to partner with the Brewers of Europe to promote this sense of community and support the industry. We look forward to safely reconnecting over a beer after the pandemic.”

The campaign will be available in all countries represented by The Brewers Of Europe: throughout the EU, Switzerland, Norway, Turkey, and the United Kingdom. Before COVID19 hit, the beer sector was booming. There are more than 10,000 breweries operating in Europe. It’s hoped that with support from governments and consumers, beer can bounce back and help people reconnect with each other after restrictions have been lifted.

Download the Untappd app and use it to check in while drinking a beer at home. More information about what consumers can do and what support measures are recommended by The Brewers of Europe can be found at reconnect.beer.

About The Brewers of Europe:

Based in Brussels, The Brewers of Europe brings together national brewers’ associations from 29 European countries and provides a voice to support the united interests of Europe’s 10,000 breweries. The Brewers of Europe promotes the positive role played by beer and the brewing sector in Europe and advocates the creation of the right conditions to allow brewers to continue to freely, cost-effectively and responsibly brew and market beer across Europe. Follow us on Twitter and visit our website.

Founded in 2010, Untappd is the world’s largest social beer app, with over 8 million users globally. Individuals can “check-in” and rate beers at bars, restaurants, breweries and a host of other venues as well as view friends’ profiles to toast and comment on their beer choices. Additionally, the company provides menu publishing software to over 18,000 businesses worldwide. www.untappd.com