Europe needs to keep up its support for the beer sector 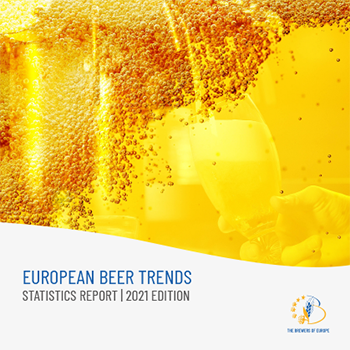 As Europe continues to battle the pandemic, it must maintain its support measures for the beer sector, The Brewers of Europe said on December 20th.

The call comes as The Brewers of Europe, the voice of more than 12,000 breweries, released its 2021 European Beer Trends Statistics Report, which revealed how overall beer sales had collapsed in the first year of the pandemic. The statistics show that combined beer sales in 31 European markets fell in 2020 from 385.5 to 354.5 million hectolitres. This was a staggering drop of over 3 billion litres, representing more than an 8% collapse in beer sales.

While the 2020 and 2021 lockdowns have lifted, there are still many restrictions in place across Europe, and consumer confidence remains low amongst some groups. These continue to affect the brewing sector. However, with the right targeted framework support, particularly focused on the hard-hit beer hospitality market, brewers can bounce back and lead Europe’s recovery through job creation, increased value and government tax generation.

“As we look to the future, we need to ensure that brewers have solid ground to recover,” said The Brewers of Europe Secretary General Pierre-Olivier Bergeron. “The beer industry is part of a complex chain involving many businesses. Concrete, long-term support will help them recover or maintain their operations. Governments need to step in with measures to cope with the negative economic impact of the pandemic. With targeted support, beer hospitality can lift the economy, bring in much-needed government revenues and boost jobs all along the brewing, production and hospitality value chain. Bars and pubs can once again become pillars of the local community – and with it, the economy”.

The 2021 report covers the 27 European Union member states, plus Norway, Switzerland, Turkey and the United Kingdom. It shows how the steady, decade-long renaissance in both production and consumption of beer ground to a stuttering halt as the pandemic hit. The hospitality sector took the brunt of the damage. By mid-March 2020, almost all of Europe’s bars, cafés and restaurants were closed, and would not reopen until around May. The second wave in the autumn forced them to close again in October 2020, often only reopening from April 2021. The result was an average 40% drop in beer hospitality sales in 2020, a loss that was only marginally recouped by retail sales.

These closures impacted the whole social economy: people’s livelihoods, government tax revenues and citizens’ wellbeing were hit as communities shut down, Europeans self-isolated, culture was curtailed and social lives ground to a standstill.

The diverse expansion of the beer culture also stalled. The previous decade had seen a flowering of start-ups and innovation in the sector. Indeed, for five consecutive years, over 1,000 new breweries opened annually across Europe, almost doubling the total between 2014 and 2019. However, in 2020 this entrepreneurial boom came to a staggering halt. At the end of 2020, there were some 12,473 active breweries across Europe – but just 225 new breweries had opened during the previous 12 months.

What is clear, however, is that brewers are resilient. Times are tough but so are brewers. Their entrepreneurial spirit remains. As for consumers, they still love good beer and have a thirst for new tastes. Brewers will meet this demand, innovating to ensure the brewing sector returns stronger than ever.

About The Brewers of Europe:

Based in Brussels, The Brewers of Europe brings together national brewers’ associations from 29 European countries and provides a voice to support the united interests of Europe’s 12,000 breweries. The Brewers of Europe promotes the positive role played by beer and the brewing sector in Europe and advocates the creation of the right conditions to allow brewers to continue to freely, cost-effectively and responsibly brew and market beer across Europe. Follow us on Twitter and visit our website.