The beer sector is embedded in communities. It sources locally, creating jobs in villages, towns, and cities across the whole of Europe. As much as 95% of beer-related employment usually occurs outside the brewing companies themselves. This means that 1 job in the brewery usually creates an additional 18 jobs in the economy. That economic activity provides significant tax revenues, in particular through hospitality beer sales, and value to local and national governments. We are proud that for a decade since the last economic shock, we could speak in the beer sector of stabilisation and recovery, followed by steady and sustained progress, further strengthening beer’s contribution to the European economy as a major consumer good and export commodity. Prior to the COVID19 crisis, the beer sector was growing, with production and consumption increasing, exports rising, brewery numbers on the up and the range of beers continuing to expand.

However, due to the pandemic and related restrictions on the hospitality sector, the number of jobs created in beer hospitality fell by over 500,000. From March 2020, Europeans had to adhere to measures that prevented close-proximity social situations. Hospitality venues, where one third of all beers were typically served, were shut down or heavily restricted, whilst many gatherings of friends and family, events, and festivals, were banned or had to be cancelled. The measures taken by governments in 2020 and 2021 disproportionately impacted bars and restaurants, eliminating 45% of beer hospitality sales volumes in Europe in 2020 compared to 2019 and decimating the significant, positive contribution made by the beer value chain to the wider economy. In 2021 hospitality beer sales were still down by 35% when compared to 2019. The size of the impact depended on the spread of the virus, the extent of the restrictions imposed by government, the generosity of the support measures put in place and, perhaps most importantly, the size of the on-trade beer market which generated 36% less value added in 2020 compared to 2019 – a loss of €10 billion. In spite of marginal overall growth in 2021 versus 2020, the ongoing struggles in the overall beer market, coupled with the shift from on to off trade, in 2021 vs. 2019, kept overall job creation 16% down, value added 10% down and tax generation 13% down.

Whilst beer production in 2021 in the 19 Euro area countries was still 11% below 2019 levels, wine and spirits production actually increased by 3% and 5% respectively compared to 2019.

Approximately half of the beer generated jobs lost in 2020 were regained in 2021, ending the year with 2.3 million jobs, but still 16% below 2019 levels with the vast majority of these losses still to be recovered in beer hospitality. 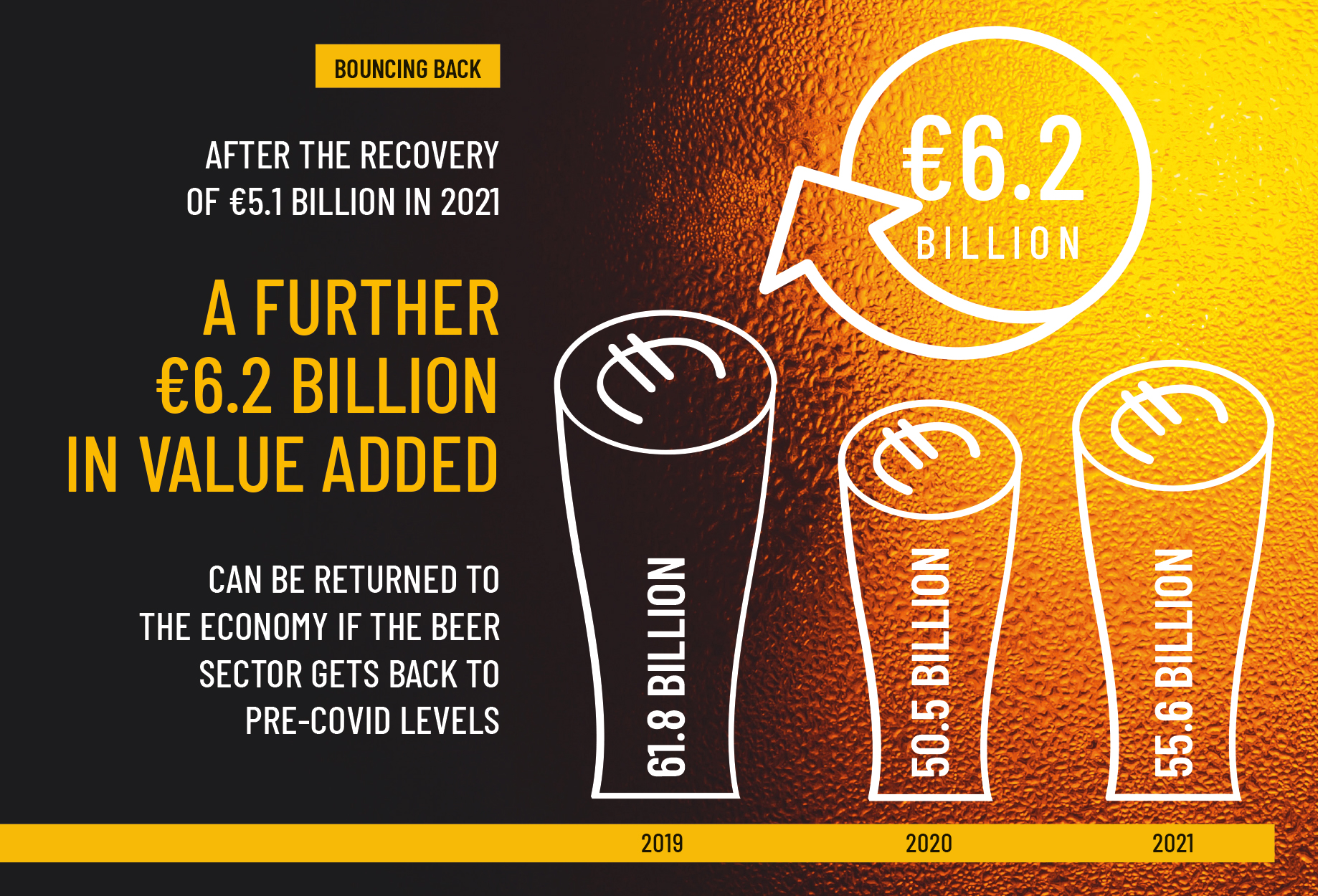 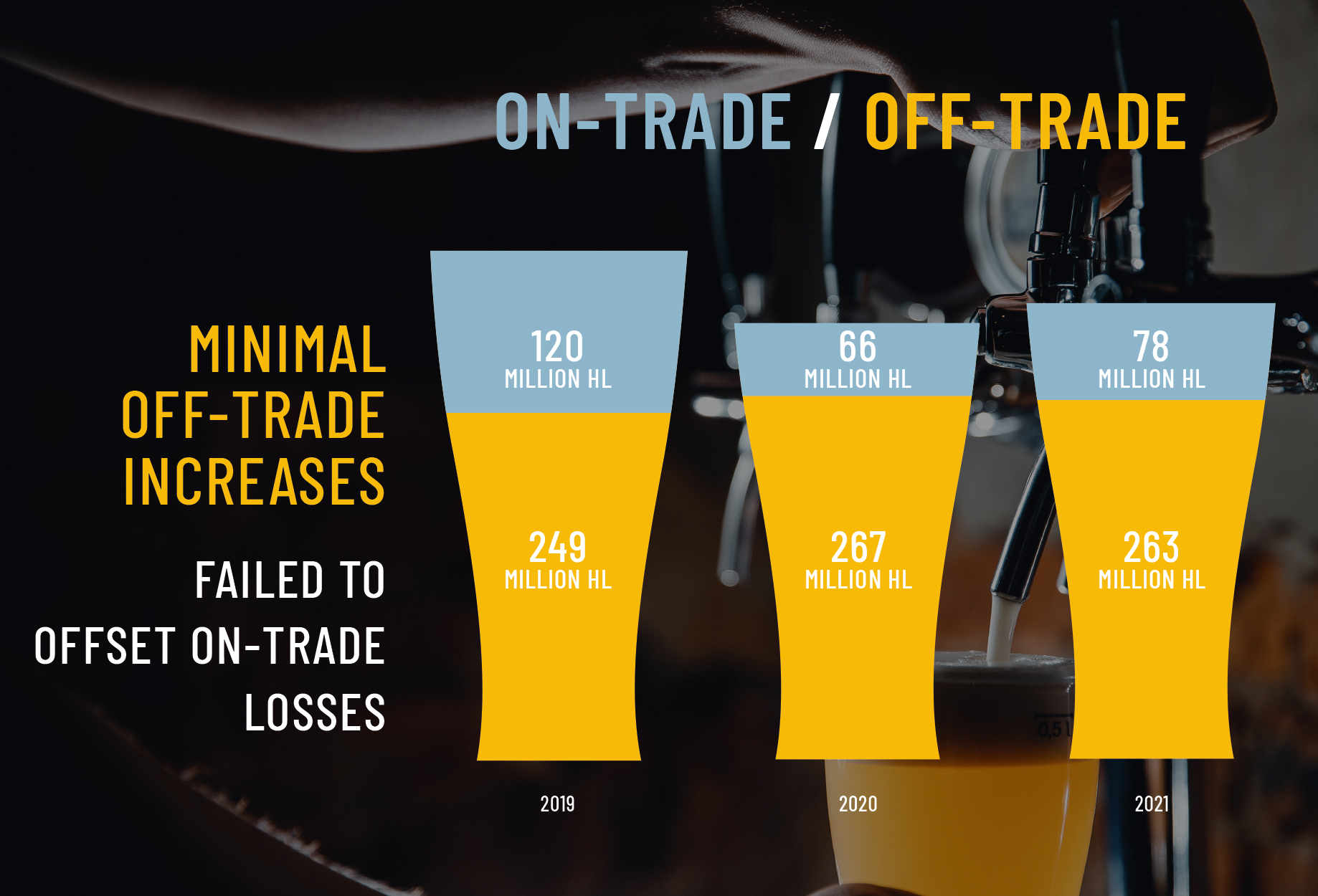 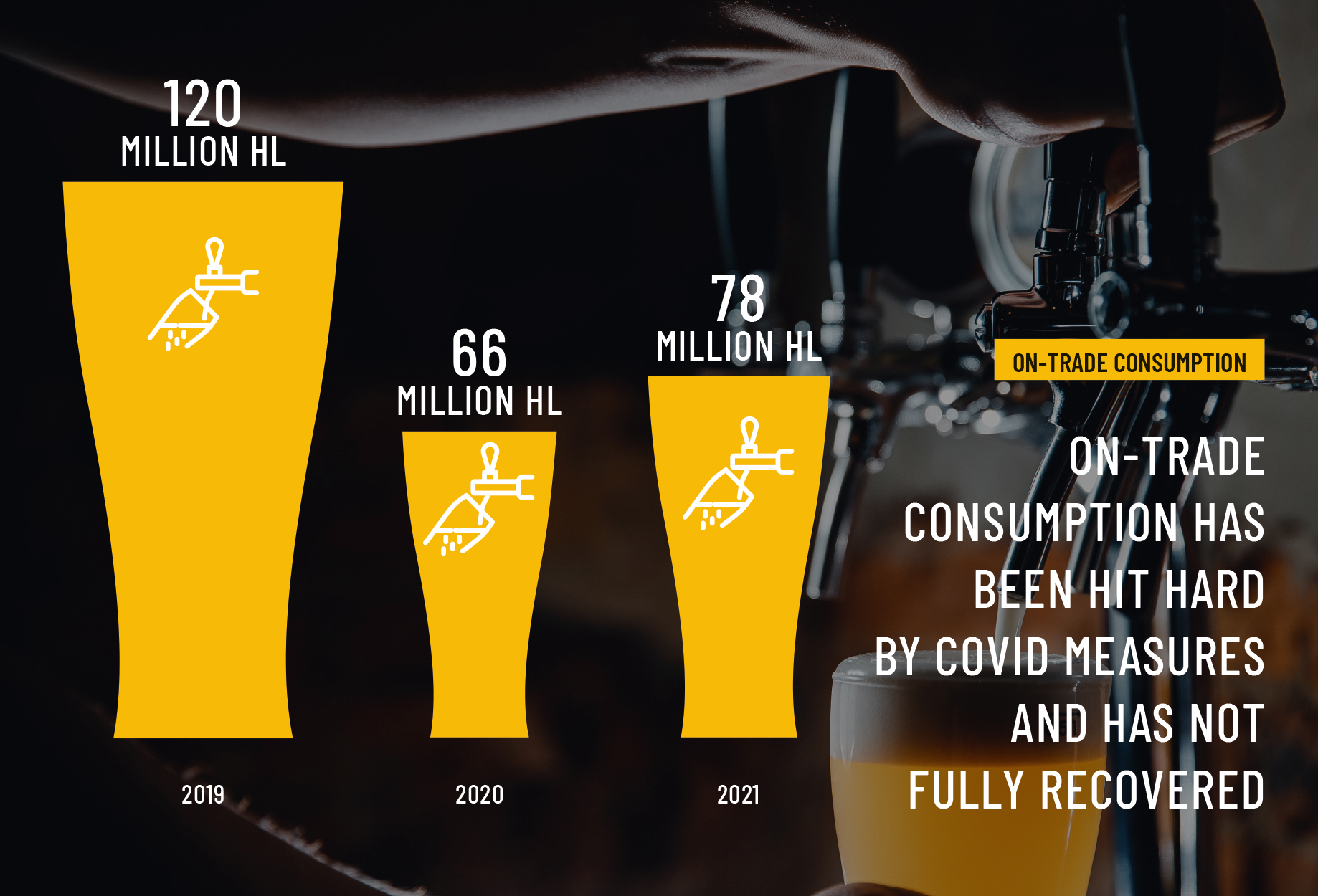 If the right support measures are put in place, it is expected that the diversity of choice, number of breweries, and interest in beer will remain high as we continue to recover from the pandemic. Europe Economics’ new economic report shows that with continued targeted support, the jobs will return and governments can also expect to receive up to €6 billion in extra tax revenues if beer hospitality were to return to pre-pandemic levels of activity. The beer value chain bouncing back to pre-Covid levels can also bring billions in value added back into the European economy. However, many businesses will have been badly affected, some will have closed forever and solidarity and support will need to continue to ensure renewed growth that ultimately drives a green recovery for the whole economy.

DISCOVER NOW HOW THE BEER HOSPITALITY CAN SUPPORT THE EUROPEAN RECOVERY